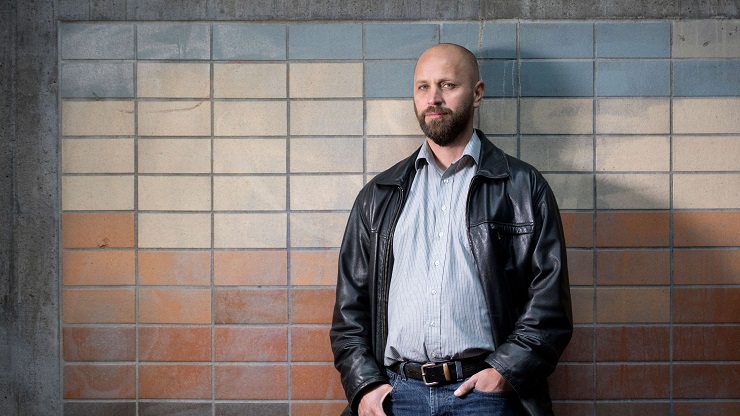 "I get an impetus from the strong life science industry that exists in Uppsala, with many talented people who can join in and run companies”, says Håkan Engqvist, Professor of Applied Materials Science at the Department of Engineering Sciences.
Photo: Mikael Wallerstedt

Håkan Engqvist, Professor of Applied Materials Science, has been involved in starting several companies and has more than 50 patents. His special area of interest is ceramic materials, which can be used for many applications in the human body.

The winner of the 2018 Hjärnäpple[1], Uppsala University’s prize for successful knowledge transfer, has been working on innovations for ten years. After getting his PhD, he worked in industry for eight years. He then joined UU Innovation and was a co-founder of Ångström Materials Academy (ÅMA), for collaboration between researchers and companies. Eventually he started his own research group, and, after a few years, became a professor – still with innovations in focus.

His projects share an emphasis on ceramic materials used in the human body. The company OssDsign develops implants made of ceramic materials to repair skull fractures, for example. The skull implant is now sold on the international market, including in the US.

The third company, Psilox,is a spinoff from Biomatcell, a VinnExcellence centre in Gothenburg where Enqvist was formerly a researcher. Today, Psilox is working on toothpaste and gel to treat hypersensitive gums.

“We’re also involved in some interesting projects on the research side. For instance, we’ve developed the world’s toughest glass ceramic for artificial teeth, and are also testing a biodegradable glue that can be used to mend fractures. It doesn’t exist today, so if we succeed it’ll be wonderful,” Engqvist says.

He became hooked on ceramic materials early on. They were the kind of materials he wrote his thesis about and then worked on at Sandvik. In Uppsala, at the Department of Engineering Sciences at the Ångström Laboratory collaborative partners like Jöns Hilborn, Professor of Polymer Chemistry, are close by.

“I’ve tried other materials research too, but found the niche of ceramics and biological materials, where I really can contribute. Actually, the only downside is that there’s no major ceramic materials company in Sweden, so for a great deal of what I have to go it alone. On the other hand, I get an impetus from the strong life science industry that exists in Uppsala, with many talented people who can join in and run companies.”

Despite all the companies and patents, there is no doubt that Engqvist is primarily a researcher. He is involved in starting companies, but not in their operations. Instead, he is a board member.

Is staying out of the business side difficult?

“No, it works fine. You have to see your own role. Professional issues from a company perspective come up quite quickly, and there are others who are great at them. This is what I do. The research is what keeps me busy.”

What’s your top tip for succeeding in innovations and collaboration?

“In every project and all research, believing in your projects is a must. If you don’t believe, you won’t get others to join you and then it’ll never work. On the other hand, if I think I’m on to something good, I just crack on with it. Whether it’s a thoroughly solid idea for basic research or whether I think I can meet a particular need doesn’t matter. But just being fired with enthusiasm isn’t enough: you have to be strategic and select what to concentrate on.”

“Every project I’ve been involved in has gone through the innovation system in Uppsala. They’ve helped with everything from seed money to legal issues. We’ve had a tremendous lot of IP and patent advice, and also a bit of business development.

“It can be hard for companies to get through the first stage, but it’s an everyday matter for UU Innovation and UUAB. They’ve got a good grasp of all that. You need to have a sound project, good people and early investors. Only then do you have a sporting chance of establishing a business.”

[1] The Swedish word hjärnäpple, literally ‘brain apple’, is a pun, or play on words. The first half of the word sounds like järn (iron), and is an oblique reference to the ‘iron apple’ sculpture bestowed on the winner along with the prize money. See www.uu.se/en/about-uu/traditions/prizes/hjarnapplet.

Current news: Winner of the 2018 Hjärnäpple, Uppsala University’s prize for successful knowledge transfer.
Title: Professor of Applied Materials Science at the Department of Engineering Sciences.
Leisure interests: I spend a lot of time on the children’s sports: football, floorball and ice hockey.
Latest book read: 1968 by Jan Guillou.
What makes you happy? When things go well for someone close to me.
What makes you angry? Injustice.
Hidden talent: I’m pretty good at Judge Judy. I think I’ve seen most of the episodes.

Biomaterials which can repair injuries

More about the research within applied materials science at Uppsala University